When an aspiring surgeon from a prestigious family loses her promising career, she locks up her emotions—and her heart. But a sexy musician from the wrong side of the tracks just might hold the key.
We are living in a material world…
Austin
I’m no hero.
But when I saw an SUV smashed between trees, I knew I had to help.
I never thought I’d see the driver’s beautiful face again. Never wanted to after I found out she was from one of the wealthiest, most powerful families in the city.
I’d never be good enough for a woman like that.
But there she was six months later, in the second row at my show dancing to the song I wrote about her.
Maybe fate is more powerful than money.
Liz
Ever since the car accident, I haven’t had full use of my hand—and that’s pretty damning for an aspiring surgeon.
The career my parents pushed me toward since I was a kid is over. I don’t know how to tell them—or where my life goes from here.
Then I met Austin, the brooding, sexy musician who stole my breath—and unlocked my heart.
But we come from different worlds, and my family has made it very clear that they don’t approve. I’m no material girl—I thought we could make it work. But I didn’t realize just how far my family would go to keep us apart…
OPEN YOUR HEART is the first full-length novel in the Material Girls series, but can be read as a standalone. Happily Ever After guaranteed. No cliffhanger…though you may be lured into the next book of the series. 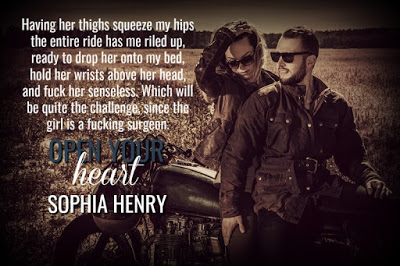 Pilots Hockey Series
DELAYED PENALTY
POWER PLAY
INTERFERENCE
UNSPORTSMANLIKE CONDUCT
BREAKWAY
Praise for the PILOTS HOCKEY SERIES
“Henry’s debut novel evokes the image of a culture characterized by a stoic exterior, only to reveal deep love as the characters dissolve their emotional walls from the inside out. [Readers] looking for heartfelt romance will feel the warmth emanating from this page-turner.”—Library Journal
“Delayed Penalty is sexy, fun, and full of angst. Not only does Aleksandr dominate the ice, but he fights for what he wants outside of the rink as well. I will definitely read it again!”—New York Times bestselling author L. P. Dover
“Delayed Penalty is such a rush! Everything I love about the New Adult genre is right here: a captivating premise, a fresh new setting, and a scorching hot hero who constantly keeps you guessing. The romance is off the charts and Sophia Henry tackles real issues that tug at your heartstrings.”—New York Times bestselling author Rachel Harris

“Sophia Henry’s hockey novels are fun and flirty, warm and sweet, with relatable heroines and swoon-worthy hockey heroes. They’ll bring a smile to your face and warmth to your heart.”—Kelly Jamieson, author of the Aces Hockey series
“Unsportsmanlike Conduct was a heartfelt story that I could not put down. It made me experience just about every emotion, and it truly moved me. I look forward to Sophia Henry’s next book in the series.”—Diane’s Book Blog

Sophia Henry, is a proud Detroit native who fell in love with reading, writing, and hockey all before she became a teenager. She did not, however, fall in love with snow. So after graduating with an English degree from Central Michigan University, she moved to the warmth of North Carolina for the remainder of her winters.
She spends her days writing books and tweeting too much. When she’s not writing, she’s chasing adventure with her two high-energy sons, watching her beloved Detroit Red Wings, or rocking out at as many concerts as she can possibly attend.