Add to your TBR – Goodreads

Adam Cooper is taking a break from relationships. After a failed engagement because of his fiancee’s secrets and lies, he’s put all of his heart into establishing his law practice. The downside? Settling cases out of court has left him discontent and craving a good fight. One he can only find in the courtroom. The one place he can be ruthless and uncaring, which is exactly what he needs. And then he meets Holly… Holly Munroe has been on her own since she was fifteen. With a past she’s trying to forget and a future she’s uncertain of, the last thing she needs is any attachments. But when she’s taken in by a woman with a big heart, the once orphan’s defenses quickly crumble. And then she meets her landlord’s son, Adam… For a woman who equates love with disaster, getting involved with Adam is the last thing on Holly’s to do list. Her goals are to find a new job and keep up appearances so she can gain guardianship of her teenaged brother. But with Adam she finds the one thing she’s always been missing; people rooting for her. Perhaps she can have it all? But only if she can keep Social Services away from the new people in her life and keep her family’s ugly history a secret. The more Adam gets to know Holly, the more he wants to break his no relationship rule and become her champion. But his killer instinct that’s been honed for cross-examining witnesses in the courtroom rears its head in their romance. He can’t shake the feeling she’s keeping secrets from him. And Adam knows that secrets in a relationship lead only to one verdict. 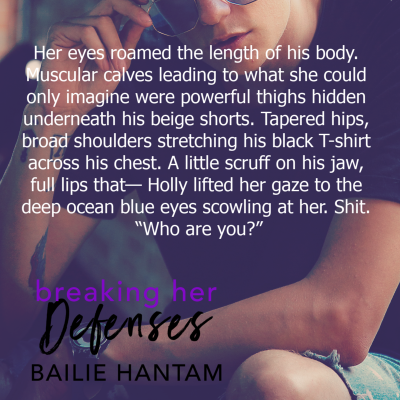 Bailie Hantam lives in Johannesburg, South Africa. She’s been writing stories her whole life. Her love for the romance genre started back in her teen years, when she devoured everything ending with a Happily Ever After. She put off writing for nearly two decades while she concentrated on raising her daughter and helping with her husband’s business. Now, with an empty nest, and a little more free time, she is finally writing and giving those characters in her head their own Happily Ever After.