Add it to your Goodreads shelf
COVER

BLURB
Law of Temptation is part of Kristen Proby’s With Me in Seattle Universe. One dominant woman in the boardroom. One dominant Master in the sex club. Emme has worked hard to get where she is. She’s had to prove herself as a woman in a man’s world. Her law firm has seen how good she is and when she is offered a chance at a high profile case, she takes them up on it. She is always in control and she likes to dominate a room when she’s in it. When her friend offers to take her to Club Temptation she jumps at the chance of a good night out. She doesn’t realise what kind of club it is. But she’s game for anything. Or so she thinks. Logan has been assigned a high profile case and when he meets with the opposing law firm he’s shocked to see a woman in the room. After mistaking her for a secretary and her putting him in his place, he recognises the fire in her eyes. He is attracted to her and funnily enough, her dominance in the boardroom. After a hot night with Logan in Club Temptation, Emme worries that he would want to dominate all aspects of her life. She can’t deal with that. She needs to be fierce at work and she’s happy to be submissive in the bedroom. But he’s like a drug that she has become addicted to. Can these two dominant people make it work? Or will Emme’s wish to be taken seriously in her work life force them apart?
PURCHASE
Amazon 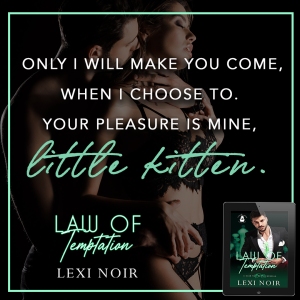